ARTIST OF THE MONTH: ELVIS PRESLEY

The popular – and indeed, erroneous – mythology surrounding Elvis Presley’s career between his discharge from the US Army in early 1960 and his legendary ‘’68 Comeback Special’ is that it was somehow washed up. True, his increasing time in Hollywood during the decade resulted in artistic diminishing returns, but his voice and musical talent were never in doubt.

A closer inspection of Elvis Presley’s work in the immediate aftermath of his leaving the Army reveals less a rebel seemingly neutered by the military service performed for his country, and more an artist understanding, embracing and building on his increasing maturity. And it’s to Elvis Presley’s fourth studio album – the appropriately entitled ‘Elvis Is Back!’ – that we must focus our attention.

Released 60 years ago to the month, ‘Elvis Is Back!’ is a milestone album. Not only was it his first set of new recordings since ‘Elvis’ Christmas Album’ in 1957, this collection of 12 songs were also recorded in the then nascent and revolutionary technique of stereophonic sound. As with his career breakthrough, ‘Heartbreak Hotel’, Elvis Presley was once again pointing the way forward.

And while ‘Elvis Is Back!’ finds The King returning to the music that he loved so much – rock, pop, R&B, the blues and gospel – his approach and delivery are suffused with the experience of a man who has seen and tasted the wider world. It’s evident in ‘The Girl Of My Best Friend’ in which the narrator’s love must remain an unrequited secret. This isn’t a childish crush, but something deeper and more primal, and Elvis’ voice carries the song’s weight in a manner that wouldn’t have been imaginable just a few years before.

Similarly, Elvis’ reading of ‘Fever’ smoulders throughout. Teasing and taunting, the song is delivered not by a boy but a man. Similarly, that maturity and understanding of the material at hand is palpable on the equally sensual ‘Thrill Of Your Love’.

What’s also incredible about ‘Elvis Is Back!’ is the speed at which is was recorded. Reunited with guitarist Scotty Moore and drummer DJ Fontana, the trio was joined by a crack squad of musicians including the legendary piano player Floyd Cramer, guitarist Hank Garland, bassist Bobby Moore, percussionist Buddy Harman and the celebrated backing group The Jordanaires. With such an incredible pool of talent, the bulk of the album was recorded in just two sessions on 3rd and 4th April.

As we’ve seen, ‘Elvis Is Back!’ is significant release in The King’s back catalogue, but more than anything, it’s the moment that Elvis Presley transforms himself from a teen idol to an artist of startling talent and depth. While all around rock’n’roll was being dismissed as a passing fad, its decreasing status helped along by any number of teen idols lacking the raw power that had propelled Elvis Presley to the top, here The King was emerging from his cocoon to take flight on the next stage of his incredible career.

‘Elvis Is Back!’ wasn’t just an album or song title. It was a statement of intent and one that still holds true. 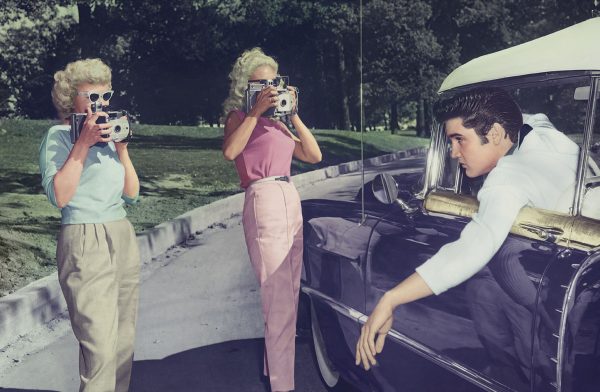