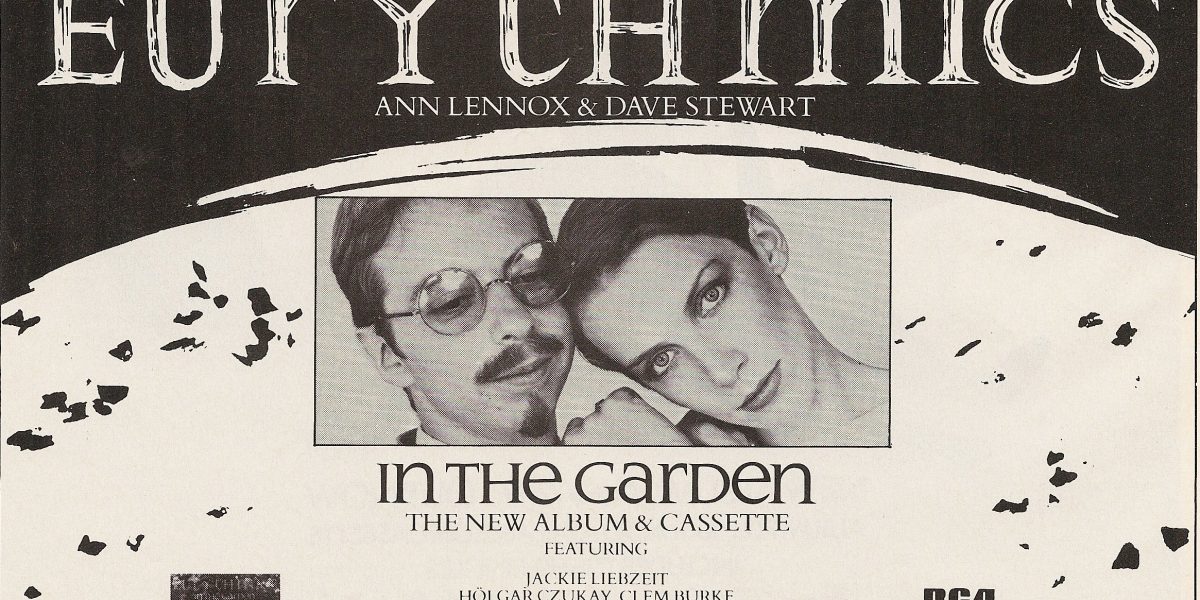 Happy Birthday 'In The Garden'

Much has been made of the term ‘post-punk’, yet in Simon Reynolds’ remarkable book on the subject, Rip It Up And Start Again, the Eurythmics – singer Annie Lennox and multi-instrumentalist David A. Stewart – barely receive a handful of mentions across its 600 pages. Not surprising, you may think, as they crafted a series of stadium-friendly pop anthems during the 80s, but all bands have to start somewhere. They had a past as well; which in many respects initially worked against them.

And although, as Reynolds suggests, they became the very vanguard of ‘new pop’, 1981’s In The Garden, 35 years old at the time of writing, has much in common with the angular iciness of post-punk. It sounds like an underground album by a long-lost outfit, that had they been called The Anglepoise or some such, would routinely be referred to with great reverence. If it is referred to at all, In The Garden is seen as a quirky curio at the start of a long, lucrative and much-loved career.

Many people remembered the Tourists, their previous group, too well. The Tourists had hit the UK Top 5 in 1979 with an uncharacteristic version of the Dusty Springfield standard I Only Want To Be With You; and although they had many dark, punky, power-poppy songs, they became seen as a chart act, something the group hated and soon, they imploded. “We were on a funny boat, The Tourists,” Lennox told NME in 1981. “A strange craft . . . When we did that song it was purely for fun. But after that it became bizarre. The things that happened to us were so wild, yet everyone got the impression of nice, clean poppy people.” People’s memories were long: The Tourists’ success to Lennox “was like a grey shadow with me every bloody day for a while. It’s off me now though,” she told Smash Hits in March 1983.

As a reaction to the Tourists’ achievement, Lennox and Stewart, who were at the time a couple both privately and professionally, started writing and raced out In The Garden. As Smash Hits said, it “was recorded with German producer Conny Plank, Blondie drummer Clem Burke, and various German musicians like Robert Görl from DAF and the slightly loony ‘sound-painter’ Holger Czukay. It was released later that year but everyone ignored it.”

The association with Neu! And Kraftwerk producer Plank had begun in the Tourists days, and the Eurythmics were to all intents purposes born at Plank’s studio outside Cologne, where they attended his New Year’s Eve party in 1980, at which they jammed with drummer Görl. “Eurythmics began there . . .” Lennox told NME. “Just people listening to the music for a whole concept instead of their keyboard bit or whatever.”

Flexibilty was key, and like many of the era, by keeping it small, the duo could work with additional musicians as and when they wanted. “We want to create something new which is flexible and can grow, and people can work in it for six months or two weeks; it won’t matter,” Lennox continued. This new approach courses through the album; recorded between February and June 1981, In The Garden sounds like freedom. 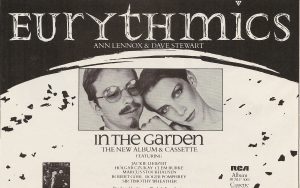 Two of the tracks (English Summer and Caveman Head) were written with Lennox and Stewart’s old flat mate guitarist Roger Pomphrey, who would go on to be a world-respected promo director before his passing in 2014. Lennox was to say that he was “A bona fide real-deal rock’n’roller through and through, who loved nothing more than strapping on an electric guitar and turning it up to 12. That’s when his soul reverberated and sounded at his best.” Pomphrey adds a Cure-like echo-heavy shimmer to the tracks he played on.

With its Enoesque taped crickets, English Summer opens the album drifting in with sinister ennui, propelled by Pomphrey’s guitar and Clem Burke’s metronomic drumming. Belinda is a full-on stomper, with Görl adding drums under an Edge-like guitar part; in many respects, it is closest in spirit to the Tourists; it builds to a subtle French horn part supplied by Holger Czukay. Released as the group’s second single in August, it failed to chart, becoming one of only a handful of Eurythmics singles to do so.

Take Me To Your Heart signposts the progression that would be fully realised with their next album Sweet Dreams (Are Made Of This). A throbbing pulse and Lennox’s coolest vocal delivery make for an irresistible pop confection. She’s Invisible Now points most to the sixties-infected pop that the group were later to revert to with Thorn In My Side.

The original first side closer, Your Time Will Come, is the album’s de facto title track. It provides pulsing power pop, complete with two members of Can (Czukay and Jaki Liebezeit) playing brass. Caveman Head is another jittery new wave sprint, again co-written with Pomphrey.

Never Gonna Cry Again is where the Eurythmics’ soon-to-be illustrious singles career began. Released in May 1981 on RCA; the label’s marketing machine lifted it to No.63 in the UK charts. Interestingly, it is one of the few times Lennox has committed her flute playing to record. All The Young (Of Today) is dated but quaint with its layered choruses and brooding bass-heavy tom-tom-driven rhythms. Stewart provides Robert Fripp-style guitar over patches of found voices. Sing-Sing is a loping synth stomp, with Lennox dipping in and out of the French language. Album closer Revenge is a conventional pop song wrapped in avant garde trappings, underpinned by Stewart’s conventional, almost funk-like bass line. The track was later reworked as Revenge 2 around the time of the group’s Revenge album.

In The Garden (RCALP 5061) was released on October 16, 1981, into a pop scene, which ironically had the other Dave Stewart (with Barbara Gaskin) at No. 1 with It’s My Party. New Romanticism, then a chart staple for over a year, was giving way to a scratchy Chic-influenced white boy funk led by ABC and Haircut 100. What the Eurythmics shared in common with their previous group was that they seemed entirely out of step with their times. A brief British tour was lined up taking in ten venues from 5th to 23rd December 1981. All was rather low key. That so could have been it, were it not for RCA’s loyalty to David Stewart and Annie Lennox. 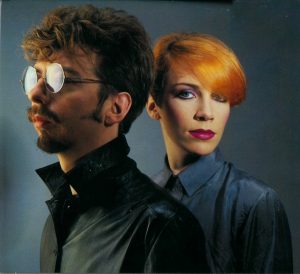 11 weeks before In The Garden was released, MTV was launched, and soon the channel was clamouring for content; something that the Eurythmics were able to provide in spades. In a little over 18 months, they were high in the UK and US charts with a string of hit singles, with Lennox offering a female counterpart to Boy George’s ‘gender-bending’, as it was quaintly known in the day.

In a world where the pop path is so well trodden, In The Garden comes to us so long after the event as a rather pleasant surprise, providing a fascinating snapshot of a group in a state of flux, of exciting possibilities and new beginnings. It represents the hopes and experimentation of the duo breaking out of convention. It may not have the polish of Sweet Dreams (Are Made Of This) or the 80s sheen of Be Yourself Tonight, but it has something all of its own, a curious sense of imagination and boundless possibility.

by Daryl Easlea, author of Talent Is An Asset: The Story Of Sparks (Omnibus Books)