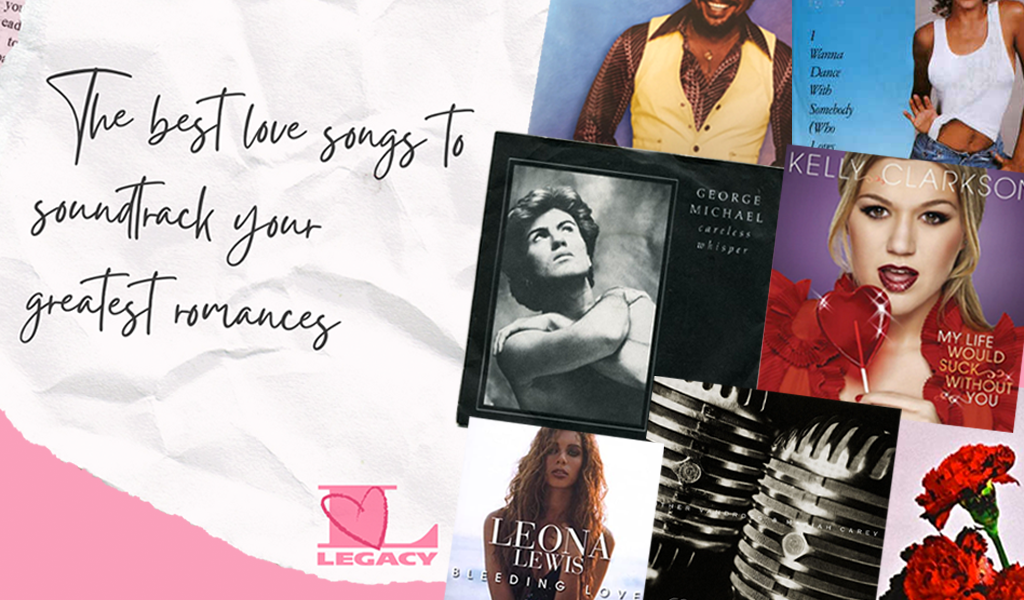 The Best Love Songs to Soundtrack Your Greatest Romances

Valentine’s Day is just around the corner, bringing with it all those mushy feelings of love. Whether your heart is bursting with romance, you’re in the giddy first stages of flirtation or you’re still getting over an old flame, there’s a love song to soundtrack your situation. In the 21 songs below, you’ll find the passion, emotion and poeticism to make your heart swoon and your inner romantic satisfied. To paraphrase Shakespeare, music is the food of love, so play on.

That iconic saxophone melody in this George Michael classic is full of longing, making the pop star’s feelings clear before he’s even sung a word. When he does start sharing his story, it’s a cautionary tale not to “cheat a friend”, made all the more sad by Michael’s poetic first verse: “As the music dies, something in your eyes/ Calls to mind a silver screen and all its sad goodbyes.” If you’re spending this Valentine’s Day wondering what went wrong, you’ll want to turn this one up loud.

Sometimes you meet someone who you just click with and it feels like they can read your mind and know you inside out. The Fugees’ version of ‘Killing Me Softly’ speaks to that unexplainable connection, Lauryn Hill and her soulful, timeless vocals nailing the initial feeling of being seen so intensely. “I felt all flushed with fever/ Embarrassed by the crowd,” she sings softly. “I felt he found my letters/ Then read each one out loud.”

The King of Rock’n’Roll dialled back the hip-swivelling but got hearts racing in a different kind of way with this ultra-romantic ballad. With his deep baritone voice and the swooning steel guitar melody, it combines to make something that you can’t help but go all gooey eyed to. Throw in Elvis’ request to “take my hand, take my whole life too” and you’ve got yourself one of the most beautiful, tender love songs of all time.

Whitney Houston – ‘I Wanna Dance With Somebody’

Whether you’re single or coupled up, this 1987 hit for Whitney Houston will have you gravitating towards the makeshift dancefloor in your living room. If you’re in the first situation, Whitney’s infectious chorus will have you jumping around, daydreaming of your crush. Already got a partner? They should already be up and dancing with you.

Originally sung by Diana Ross and Lionel Richie in 1981, Luther Vandross and Mariah Carey gave this declaration of devotion a second life 13 years later. Their version spent 13 weeks in the Top 40 and it’s little wonder – it’s a dreamy, gorgeous coming together of two superlative voices and “two hearts that beat as one”.

Luther Vandross – ‘Never Too Much’

“You are my shining star, my guiding light, my love fantasy,” Luther Vandross sings brightly in the opening lines of this lovestruck 1981 single. As it continues, he perfectly spells out that feeling of being so hopelessly in love with someone that no one else will match up and you’ll never get tired of them. “A million days in your arms is never too much,” he coos. Put this on when you want to make it clear just how much you’re in love with your other half.

Bill Withers – ‘Lean On Me’

Life isn’t always easy, but sharing the burden with someone special can make it more manageable to get through. That is Bill Withers’ message on this sweet soul classic that’s as wise as it is caring. “We all need somebody to lean on,” he assures at one point, promising to “help you carry on” and noting the roles will reverse sooner or later. It’s a great tribute to what helps make relationships last beyond the initial attraction.

No one’s perfect but it’s sometimes people’s imperfections that make us love them more, or love them in spite of their flaws. Over rippling acoustic guitar and soothing flute melodies, Billy Joel finds himself under the spell of one such woman. “She is frequently kind/ And she’s suddenly cruel,” he explains. “She can do as she pleases/ She’s nobody’s fool […] But she’s always a woman to me.”

After you’ve been hurt in love, it can be hard to jump back in again. In 2007 though Leona Lewis shared the ultimate anthem to letting down your guard and letting love back into your life. It’s a glorious soundtrack to meeting someone who you can’t help but risk it all for, Lewis throwing all her cares to the wind and declaring her love for the one who turned it all around for her.

Is there anything more romantic than having someone tell you they “give you all of me”? That’s the crux of the message in this John Legend gem – a heartfelt piano ballad that leaves you feeling like you’ve been struck in the heart by Cupid’s arrow, even if you’re not at total devotion stage of your relationship just yet. Prepare to spend hours singing happily to this song when you are though.

Boston – ‘More Than A Feeling’

Even after a relationship is long over, sometimes the magic of the good times you shared can come flooding back to you. On Boston’s best-known song, frontman Brad Delp sings longingly for his ex, after having old memories sparked by a piece of music. “It’s more than a feeling,” he yearns. “When I hear that old song they used to play.” If you’ve ever got nostalgic over a former lover, you’ll be able to relate.

Bruce Springsteen – ‘Dancing In The Dark’

“I need a love reaction,” purrs The Boss on his most successful single to date. “Come on now baby, gimme just one look.” Both the song’s strutting beat and Springsteen’s words evoke that stage of a relationship where you’re doing the dance of flirtation, hoping your moves will spark the fire that takes you from dancing in the dark to a love that burns brightly.

This joyful and jaunty Hall & Oates track is a romcom soundtrack classic (it’s featured in the likes of The Wedding Singer and (500) Days Of Summer) for good reason. It’s bubbly and upbeat, capturing the blissful satisfaction of a great love and expressing those feelings through one of the most memorable piano melodies of all time.

They might be independent women, but that doesn’t mean Destiny’s Child don’t want to look after their man from time to time. “Baby sit back and let me pour out my love letter,” Beyoncé coos on the silky song, before expressing her feelings in everyday tasks. “Let me help you take off your shoes/ Untie your shoestrings/ Take off your cufflinks.” After all, love languages come in all different forms and helping out your partner after a long day is a sweet one.

Redbone – ‘Come And Get Your Love’

One of the most successful singles for native American band Redbone, this perennial classic makes us a simple offer, wrapped up in chanted vocals, an electric sitar solo and timeless pop hooks. “Come and get your love,” the group beckon, adding a message to those who’ve been hesitant with their love lives: “It’s your business if you want some, take some/ Get it together, baby.”

A Latin rock epic that will make your Valentine’s Day feel like you’re in a sweltering beach town at the peak of a heatwave, Santana’s ‘Smooth’ is fuelled as much by passion as it is that iconic guitar solo. “I would give my world to lift you up,” sings Rob Thomas. “I could change my life to better suit your mood.” He has only two requests in exchange for these romantic gestures: “Gimme your heart, make it real, or else forget about it.”

One of the most raw love songs of the last few years, Tom Odell’s ‘Another Love’ is the perfect song to exorcise your relationship frustrations and tears to. Over a sombre piano line, the star mourns shedding all his tears on another person and being left with none to cry over anyone else. “I wanna sing a song that’d be just ours/ But I sang ‘em all to another heart,” he sighs at one point, nailing that feeling of wasting precious moments on someone who turned out not to be worth them.

Thanks to our digital world of dating apps, it always feels like there could be something better around the corner. This TLC classic might have been written before the main way of meeting someone came through swiping right, but it still contains an important lesson for all of us. “Don’t go chasing waterfalls/ Please stick to the rivers and the lakes that you’re used to,” or, in other words, don’t take what’s in front of you for granted in the hunt for something you presume will be better. In reality, the best might be the relationship you have right now.

Presented from both a male and female perspective, this 2004 superstar collab encapsulates the feeling of still pining after an ex. “There’s always that one person who will always have your heart,” Usher sings, before Keys reminisces on “the moment I knew you were the one I could spend my life with”. If you’re spending Valentine’s Day longing for someone from your past, stick this wistful R&B pearl on repeat.

The ending of a relationship doesn’t always come as a relief to those in it – breaking something off might be for the best, but you’ll fight against it for as long as you can. John Mayer knows all about that feeling, as he sings on this emotional beauty. “We’re going down/ And you know that we’re doomed,” he sighs. “My dear, we’re slow dancing in a burning room.” It’s a poetic and gorgeous comfort while the flames turn everything to ash.

Kelly Clarkson – ‘My Life Would Suck Without You’

The course of true love doesn’t always run smooth and Kelly Clarkson acknowledges that on this shimmering banger. “I know that I’ve got issues/ But you’re pretty messed up too,” she tells a lover after a big fight. Some couples are just destined to be together, though, despite the rough patches as Clarkson admits with an unusual but romantic declaration: “You got a piece of me and honestly/ My life would suck without you.”

Armed with a playlist of these classic love songs, you’ll be ready to replicate the rollercoaster feelings of any relationship. Turn it up this Valentine’s Day and get ready to feel the love.